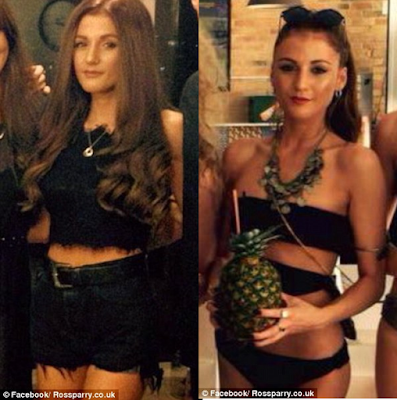 An academic’s daughter was found hanged in a field close to the home of a boyfriend who had just broken up with her by text in a row over 21st birthday gifts.

Nina Paunova, a fashion student known as the ‘Beauty of Beverley’,had also cut her wrists at a secluded spot before she died on September 8 last year.
Mr Scott dumped her by text when he was forwarded Nina’s messages claiming she would ‘ditch him’ after he spent £2,000 on gifts for her 21st birthday.
He said he had already spent £10,000 on jewellery and clothing, £4,500 on trips to London and Paris and at least £2,000 on holidays to Croatia and Menorca.

But he ended the relationship when he was sent Nina’s texts to her friend Elizabeth Gough, via Miss Gough’s boyfriend.

The messages said:
‘I told you what my plan is. Straight after my 21st and after he has spent £1,000 to £2,000 I’m gone.After all the s*** I’ve put up with. I will literally take my presents and the week after my 21st end it and delete him.’ In the hours before her death Miss Paunova, who was ‘obsessed with social media’, drove to her ex-boyfriend’s house to confront him but was refused entry and threatened to kill herself.
She then drove her car through a hedge at more than 60mph in a nearby field and hanged herself after cutting her wrists.

Her parents warned her not to get back together with her boyfriend Sam after a two month break but they had rekindled their relationship and were going on holiday three days after her death.

The student had sent a text to her mother Niviana before she killed herself which included the words: ‘I guess I should have listened sooner.’

Her father, Vesselin, a professor of chemistry at the University of Hull, said Mr Scott, who is from a ‘wealthy family’ in the East Riding, spent large amounts of money on his daughter.

‘She seemed almost obsessed, but totally in love with Sam.’In their second year together, Nina said Sam had changed. He became different and Nina said Sam would want her to pay her way more but still live the expensive lifestyle and she struggled.’In May 2015 they separated and Nina was very upset. After some time, Sam started to contact her about starting up the relationship again, and they got back together against my advice.’
Culled from Mailonline