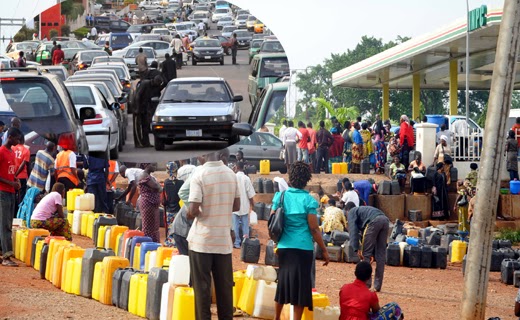 The Minister of State for Petroleum, Mr. Ibe Kachikwu has dashed the hopes of Nigerians, stating that the current queues at gas stations would persist till late May. The minister added that he was not a magician to make the queues disappear overnight.
According to Vanguard, the minister was fielding questions with the State House Correspondents after leading officials of Nigeria Union of Petroleum and Natural Gas (NUPENG) and Petroleum and Natural Gas‎ Senior Staff Association of Nigeria (PENGASSAN) to a meeting with president Mohammadu Buhari at the presidential villa, Abuja on Wednesday on when the queues at the gas stations would disappear.
[post_ad]
He said:
“One of the trainings I did not receive is that of a magician but I am working very hard to ensure some of these issues go away‎. And let’s be honest, for the five, six months we have been here, NNPC has moved from a 50 percent importer of products to basically a 100 percent importer. And the 445 barrels that were allocated was to cover between 50 and 55 percent importation.

“So, it is quite frankly sheer magic that we even have the amount of products at the stations. We are looking to see how to get foreign exchange imput. The president and I discussed extensively on how to get more crude directed at importation. His excellency will rather have less crude but have individuals in the society suffer less with inconveniences than have more crude and have them continue to suffer.”