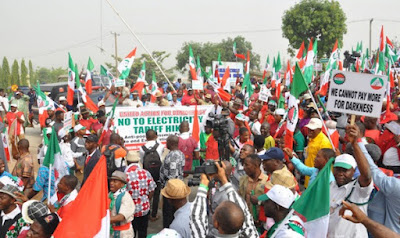 Despite an order of the National Industrial Court restraining the Nigerian Labour Congress and the Trade Union Congress from going ahead with their planned strike to protest the hike in price of petrol, the strike will go ahead as planned on Wednesday, labour officials have said.
[post_ad]
The General Secretary of the NLC, Peter Ozo-Eson, on Tuesday night told PREMIUM TIMES that from all indications the strike would go on as planned.

On the meeting with the Secretary to the Government of the Federation, Babachir Lawal, earlier convened to attempt to broker a last minute truce on the matter, Mr. Ozo-Eson said the meeting was yet to hold at about 7 p.m. on Tuesday.

“There was no resolution yet. We are just going for the meeting now. ,” the NLC scribe said on telephone interview. “We have been meeting on our own on matters that are important to us. It is clear the strike will go ahead as planned,” Mr. Ozo-Eson told PREMIUM TIMES on telephone on his way to the venue of the meeting.

He however assured that an official statement would be issued on the final position after what promises to be an all-night meeting.

The General Executive Secretary of Medical and Health Workers Union, north central, Richard Gbamwuan, in an interview with this newspaper, shortly after an emergency NEC meeting of the NLC held in Abuja on Tuesday, said that they were going ahead with the proposed strike.

“We have resolved to go ahead with the protest nationwide, as far as we are concerned, we are yet to be aware of any court injunction,” he said.

The Attorney General and Minister of Justice, Abubakar Malami, had earlier on Tuesday approached the Industrial Court on behalf of federal government to stop the proposed strike by the organized labour.

Meanwhile, various union leaders in Plateau State said they were ready to comply fully with the directive of the Nigeria Labour Congress NLC to embark on a nationwide protest on Nigeria.

The union leaders spoke to PREMIUM TIMES in Jos, Plateau state, on Tuesday, barely 24 hours to the deadline issued to the government to reverse the pump price of petrol to N86.50 by midnight, Tuesday.

The state director, Civil Society Organizations, Steve Aluko, on behalf of NLC, TUC and CSO, in an interview, said they were ready for a showdown with the government, until the new pump price of N145 per litre was reversed to 86.50 Naira.

Mr. Aluko said allied unions had been briefed and directed to mobilise for the protest en masse.

“NECs of the NLC, TUC and CSO’s met, and harmonized the positions, that a complete reversal of prices PMS, high electricity tariff and commencement of a structured inclusive multi-stakeholders dialogue process; by 12am on Tuesday, all members are to commence a general strike and Mass Action on Wednesday.”

The chairman, Nigeria Union of Journalists, Plateau State, Yakubu Taddy, said members of the union were ready to participate in the protest, but urged that it should be peaceful.