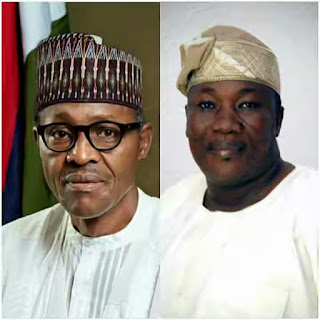 Osun State House of Assembly under the leadership of Rt. Hon. Najeem Salaam has Commended President Muhammadu Buhari for his commitment to nation building.
[post_ad]
The Assembly made the commendation in statement by the Chairman, House Committee on Information and Strategy, Honourable Olatunbosun Oyintiloye to felicitate with Nigerians on the Democracy Day Celebration as well as marking the one-year anniversary.

The house which called on Nigerians to renew their commitment to the ideals and tenets of democratic governance. noted that democracy has proved to be a preferred form of government and the one that guarantees their rights, liberty and pursuits of happiness.

The lawmakers stated that though the road to the democratic journey has been bumpy and rough, Nigerians have shown that they have fully subscribed to the system.

The parliamentary noted that 17 years of unbroken democratic governance, which also saw to the opposition taking over from the ruling party as a remarkable indication of political maturity.

They urged the citizenry to keep faith in democracy, tasked political actors to inspires confidence and called for the strengthen of democratic institutions.

The Parliamentarians noted that with the emergence of President Mohammodu Buhari, there has been remarkable improvement in the National image, success in Security Challenge, especially the War Against Boko Haram, fight against Corruption, re-positioning of the nation’s economy re-orientation of Oil and Gas, attention to power and environment and abiding by rule of separation of powers and respect for Judiciary.

The statement reminded Nigerians of the political and economic circumstances the nation found itself before the emergence of President Mohammed Buhari, highlighting that at that time the nation was suffering from an economic hemorrhage, political alienation and ostracize by world powers such as United States of America.

It contended that the security threats facing the nation, courtesy, Boko Haram was enormous, and that the monster of corruption was having a field day, the economy took a nosedived to the extent that all arms of government was compromised from functioning efficiently.

Osun Assembly highlighted that the impact of corruption on the failure of governance at that time was enormous such that the culture of impunity eroded sanity.

The statement maintains that Mr. President jump- started the economy with a bailout package and exercise political will to initiate tough decisions to steer the economy out of the woods.

Such decisions according to the statement are reflected in the Forex policy, deregulation of the oil sector and re-construction of the NNPC with 7 divisions and 20 subsidiaries.

“President Buhari upon assumption of office kick started the economy again with a bailout package N804.7 Billion Economic Bailout amidst crashing oil price, he instituted a massive probe against corruption.

More so arrest and trial of looters of public funds and recovery of some of the looted funds is on-going. Today the gain is evident but the impact is not yet visible.” The statement read

He is consistent and committed to renewal of the Nigeria state and the economy but Nigerians must exercise faith in his leadership and believe that present pains will give way for gains. His initiative on security, by moving the command center of the Military to Maduguri, redefined the fight against Boko Haram, they have been degraded.

The Lawmaker submits that through the personal integrity of President Buhari, he has garnered tremendous goodwill to mobilize both local and international support in the fight against terrorism.

It explains for the first time, that Nigeria government as a matter of state policy refocuses the economy away from the oil sector.

His administrative style is steady, he tried hard to figure the truth before he takes any step. in pursuance of transparency in governance, he commences the implementation of Treasury Single Account which has boost up the Internally Generated Revenue of Government.

The assembly while acknowledging Nigerians for their understanding, sacrifice and endurance, assured them of better days ahead.

It also urged the citizenry to remain unshaken in their faith in President Buhari Administration as the policies of federal government will translate to dividends of democracy.