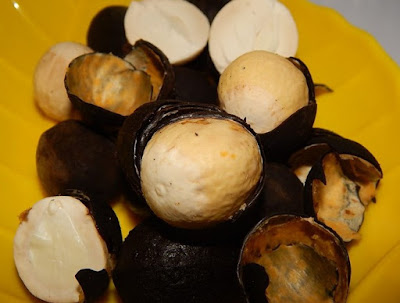 Botanically called Tetracarpidium conophoram and Coula edults, African walnuts are edible single seeded stone fruits whose plant is mostly cultivated for its nuts which is cooked and consumed as snacks. It is characterized by a black thick wall that envelopes a white-cream seed, which leaves a bitter flavour in your mouth when eaten raw.

The African walnuts has various specie, such as Euphorbiaceae (Tetracarpidium conophoram) and Olacaceae ( Coula edults). Each specie has its own specific feature. The Euphorbiaceis mostly found in Nigeria and Cameroon, while the Olacaceae is found in some Central African countries such as Congo, Liberia and Gabon.

In the western part of Nigeria, African walnuts are known as ausa or asala while they are known as ukpa in the southern part of the country. Walnuts compared with other nuts, is considered the king of nuts as it is so rich in vitamins and minerals, proteins, fiber, health fats, plant sterols and antioxidant. Researches have shown walnuts boost your health in a number of ways and at very easy-to-achieve “doses.”.

Also See: 7 Legit Things You Can Do Today to Make More Money Every Day

Walnuts can help prevent cancer as it contains cancer fighting properties such as as phytosterols, omega 3 fatty acid and antioxidant . Research have shown that it doesn’t only help reduce the risk of prostate cancer, but brea’st cancer as well. Another reason this amazing nut should be consumed regularly especially by men is because its impact on male fertility. A recent finding revealed that among men who consume about 75 grams (a bit over one-half cup) of walnuts daily, had their sperm quality, including vitality, motility, and morphology significantly improved. Also Read: 10 rules a good housewife in Nigeria must adhere to

Walnuts contain amino acid l-arginine, which offers multiple vascular benefits to people with heart disease, or those who have increased risk of heart disease due to multiple cardiac risk factors. It also contains the plant-based omega-3 fat alpha-linolenic acid (ALA), which is anti-inflammatory and prevents the formation of pathological blood clots. Research shows that people who eat a diet high in ALA are less likely to have a fatal heart attack and have a nearly 50 percent lower risk of sudden cardiac death and that eating just four walnuts a day has significantly raise blood levels of heart-healthy ALA. Its consumption also supports healthful cholesterol levels.

4. Rich In Vitamins and Minerals

African walnut contains vitamins such as vitamin E,B6,B7, thiamin, folate and also a rich source of magnesium which is higly needed by the body daily. Antioxidants are crucial to your health, as they are believed to help control how fast you age by combating free radicals, which are at the heart of age-related deterioration and walnuts contain several unique and powerful antioxidants that are available in only a few commonly eaten foods. This includes the quinone juglone, the tannin tellimagrandin, and the flavonol morin.

It also contain antioxidants that are so powerful at free-radical scavenging that researchers called them “remarkable”. Research has shown that walnut polyphenols helps prevent chemically-induced liver damage.

Adding walnuts to your diet can help you to maintain your ideal weight over time as it is associated with increased satiety. Also See: 3 Legit Things Besides Money You Need to Start a Successful Business

The beneficial dietary fat in walnuts has been shown to improve metabolic parameters in people with type 2 diabetes. Overweight adults with type 2 diabetes who ate one-quarter cup of walnuts daily had significant reductions in fasting insulin levels compared to those who did not, and surprisingly, the benefit was achieved in the first three months.