Tel Aviv, Israel (CNN)Israel has closed off the West Bank city of Yatta as authorities investigate those responsible for a Tel Aviv terror attack at a popular market that left four people dead. 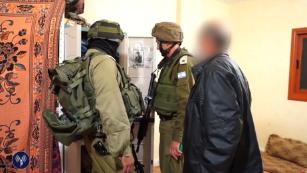 Israeli military conducts raids in West Bank 02:25
Israeli troops went door-to-door in Yatta overnight, conducting interviews and searching homes hours after Wednesday night’s attack. One woman said her son was taken away, but she didn’t know why.
[post_ad]
Despite the ordered closure of Yatta, there was no significant military presence at the city’s border. A stone barrier blocked an access road, but locals simply drove through nearby fields to get around it.
But another Israeli action has had a more significant effect on Palestinians: Israel has suspended the permits of more than 80,000 people to travel into Israel for work, religious or family reasons. It’s not clear how long that suspension will last.

Terror scene reopens
The response in Yatta comes as the Tel Aviv market reopened Thursday, with some witnesses returning to the scene of the bloodshed.
Two shooters, identified as Palestinians, opened fire at the Sarona Market — a popular food and shopping complex near the Israeli Defense Ministry.
Meital Sassi was at the market celebrating her 2-year-old son’s birthday when gunfire broke out.
“We saw the terrorists, and they started to run after us,” Sassi told CNN on Thursday. “It was a few minutes that I’ll never forget. … I don’t know how I will take my kid to this restaurant.”
The gunmen shot up the market, killing four people and wounding several others.

Four people remain hospitalized — including one of the suspected terrorists and a woman who lost her husband in the attack.
She will be released to go to her husband’s funeral before returning to the hospital for treatment, police said.

Hamas hints at more terror
And there may be more bloodshed to come, the Islamist group Hamas said. 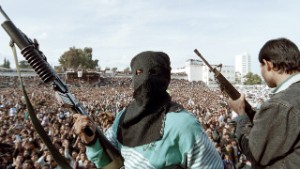 Hamas explained 02:27
Spokesman Housam Badran said the attack was the “first of many surprises” planned against Israeli forces during the month of Ramadan.
And even though Hamas praised the attack in a statement it did not claim responsibility. 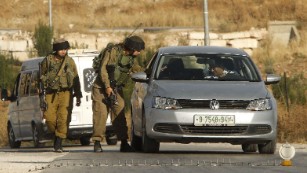 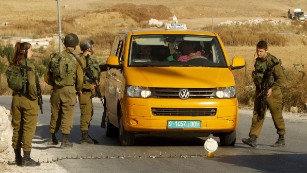 “People were having coffee. I saw a birthday cake on one of the tables,” said Amir Ohana, a member of the Knesset, Israel’s parliament, who was at the market.
“And then you see the chairs upside down and glass shattered and blood all over.”
Surveillance footage from a nearby cafe showed chaos as panicked customers knocked over tables rushing to escape. Some crawled across the floor. Others carried children in their arms.
Israeli police spokesman Micky Rosenfeld said two terrorists were captured. One was shot by police, and the other surrendered.

The suspects
The mayor of the suspects’ hometown identified the pair to CNN on Thursday. But CNN is not identifying the two as Israeli authorities have issued a gag order.
According to Israel’s security agency, the suspects are Palestinians from a village in the southern West Bank, near Hebron. Both are in their 20s.
Information about a motive wasn’t immediately available. No intelligence suggested an attack was imminent, Rosenfeld said.

A ‘savage crime’
Israeli Prime Minister Benjamin Netanyahu called the attack “a savage crime, murder in the heart of Tel Aviv.”
“We will take the necessary steps to attack the attackers and defend those who need to be defended,” he said.
The Palestinian Authority, which governs the West Bank, released a statement saying it condemns any attack against civilians, regardless of the source.

It has been participating in “very important ongoing security coordination” with their Israeli counterparts in the wake of the attack, David Siegel, the consul general of Israel to the Southwestern United States, told CNN. 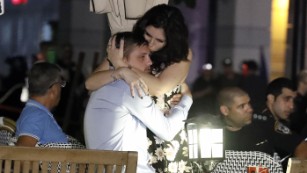 Israelis embrace following the deadly attack Wednesday in Tel Aviv.
Sarona Market is in a “trendy, hip” part of Tel Aviv, and the attackers struck on “a very crowded evening,” Siegel said.
The market is considered a “classic soft terror target,” and is nearly impossible to secure, according to Steve Moore, a CNN law enforcement analyst.

“It is really indefensible. It is a mall,” he said. “You are not going to set up a system whereby, absent body searches, you are going to stop these things.”
A press release from the opening of the market described it as an 8,700-square-meter complex with 91 stalls, shops and restaurants selling food from around the globe.
The Jerusalem Post reported in April that Tel Aviv police wanted to close the market because of “security flaws and safety shortcomings that present a risk to the public’s safety.”
But a spokesman for Gindi Holding, which built the market, told the Post the complex would not be closed and that violations only involved tables and chairs blocking entrances and exits and the way security guards were inspecting visitors at the door.

More attacks expected during Ramadan?
Israelis may not have had specific intelligence regarding this attack, but CNN analysts said the number of attacks was expected to pick up during Ramadan.

“Two things happen at Ramadan in Israel. No. 1, you expect attacks, and No. 2, you’re loosening up the security measures between Gaza and the West Bank and Israel,” Moore said.
“So it’s kind of the worst of all worlds. So maybe they (the Israelis) didn’t have an individual indication of this specific attack, but they knew attacks were coming.”
Michael Oren, a former Israeli ambassador to the United States and now a member of the Knesset, said Israel would be prepared.
“This is a country, which over the course of its 68-year history, has grown tragically accustomed to these types of attacks,” he said. “We are very resilient.”

Violence in Tel Aviv
Tel Aviv is not as violent as Jerusalem, but it has not escaped bloodshed.
Two people were killed in January when a gunman sprayed bullets from an automatic weapon near a pub there. Seven people were wounded.

In March, an American was killed and 10 others were wounded in a stabbing along an oceanfront boardwalk. Anti-police riots broke out in May 2015. 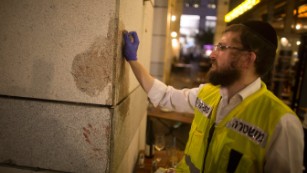 An investigator works the scene of the attack at Tel Aviv’s Sarona Market.
“These cowardly attacks against innocent civilians can never be justified,” he said. “We are in touch with Israeli authorities to express our support and concern.”
British Prime Minister David Cameron took to Twitter on Thursday to say he was “sickened by the appalling attack.”

I am sickened by the appalling attack in Tel Aviv. We stand with Israel against terrorism and my thoughts are with the victims and families.— David Cameron (@David_Cameron) June 9, 2016
Danny Danon, the Israeli ambassador to the United Nations, called on the U.N. Security Council to condemn the attack.
“Today’s heinous attack sadly proves that when the international community refuses to condemn terror against Israelis, the next attack is only a matter of time,” Danon said in a statement. “Terror in Tel Aviv must be treated the same as terror in Paris or Istanbul.”