Video showing a lion attempting to pounce on little boy 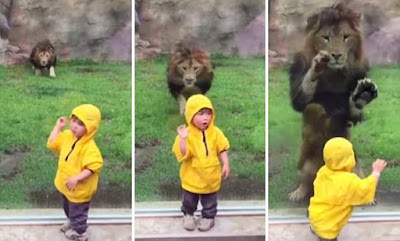 A heart-stopping video from Chiba, Japan shows a little boy turning his back on a lion enclosure only for it to charge forward and pounce – only stopped by the glass wall.
[post_ad] The adorable tot, just two-years-old can be seen watching the male lion crouching by the rock at the back of the large class-enclosed space. the boy doesn’t run away, he simply spins around to face the lion, his hand held out as he stumbles backward.

Maybe in his childish innocence he thought the big cat was just trying to come and play.

According to zookeepers the lion reportedly weighs more than 400lbs. They claim he often gets excited when he sees small children and wants to play with them.