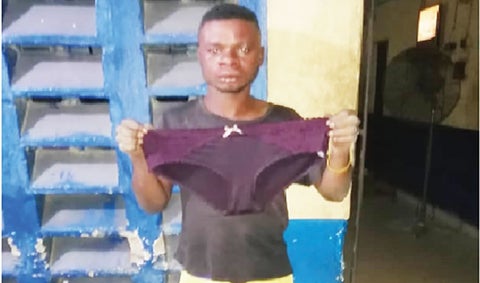 When we thought a particular trend is over, it keeps resurfacing again and again, as a vulcanizer was arrested for stealing a female client’s underwear.

Dele Ope, a 22-year-old vulcanizer have been arrested for allegedly stealing a pair of female underwear belonging to his customer, after he was called to do home service for her in Ogun State.

According to reports, Dele was the only stranger who visited the compound before the underwear went missing. So, it was easier to suggest he was the thief.

The Police Public Relations Officer in the State, Abimbola Oyeyemi, confirmed the reports to newsmen as he said, the suspect was arrested following a report by a woman on her missing underwear. It’s just so normal for Dele to be the prime suspect as it was claimed he was the only stranger in the compound.

Dele’s house was quickly searched by the police, and the woman’s pair of pants was recovered there.

“On interrogation, the suspect confessed to stealing the pair of pants with intention of taking it to an herbalist for money rituals.” Officer Abimbola said.

Dele is just 22, so one may wonder, Why the money rush? He has a bright future so what really went wrong with Dele?