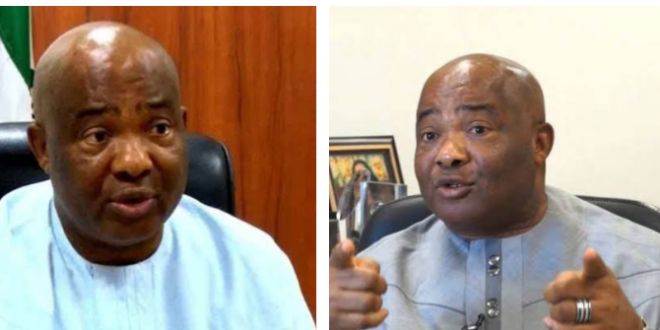 48-hours after the alleged attack on Governor Uzodinma’s convoy, government blames it on opposition

The Imo State Government has accused oppositions in the state for sponsoring protesters who attacked the convoy of the State Governor, Hope Uzodinma in Owerri, on Monday.

This is coming after the Commissioner for Information and Strategy, Declan Emelumba, pointed out one of the main reason on ban of illegal protesting in the state. According to the Commissioner some armed hoodlums who claimed to be staff members of the state oil commission, protested for the non-payment of their salaries, as normal protester, will not have protest with guns and machetes, all in the name of peaceful protest.

“The opposition is smarting from the irredeemable shame the government’s success and rubbing on their face and they quickly thought of another protest to take the shine out of the increasingly unbeatable trajectory of Governor Uzodinma’s success story. But luck ran out of them this time.” Emelumba said.

In connection to the protest, 15 hoodlums have been caught and paraded by the commissioner of Police, Isaac Akinmoyede. Moreover, the Governor, is yet to make any official speech of the attack, as at time of filing this report.

Previous “Is like you are stupid”- Last Season BBNaija Housemate Frodd, Lashes out at Omashola For His Tweet
Next Beware Of Online Scammers – NCDC Warns Nigerians.