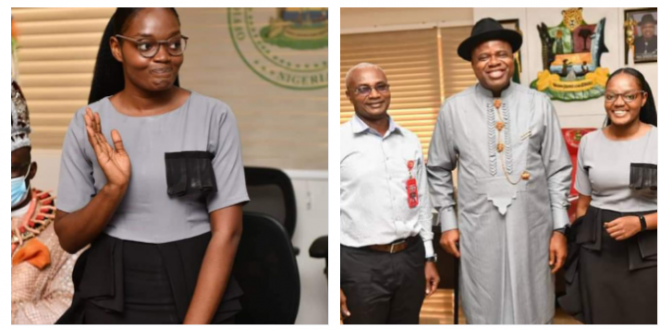 The Governor of Bayelsa State Douye Diri, has offered Ebizi Eradiri, an opportunity to study her Master and PH.D degree in any part of the world she pleases.

According to reports, Eradiri, was honored by the governor due to her academic excellence, as she graduated with First Class Honors at both the Niger Delta University, Amassoma, and the Nigerian Law School.

Following the scholarship from the Governor, an automatic employment was issued to Eradir, as she will assume the post of lecturer in the Faculty of Law, Niger Delta University. Miss. Ebizi Eradiri, was received by the Governor at the state government house in Yenagoa, with other top government officials in attendance.

Governor Douye Diri, also announced her as the “New Face of Bayelsa Girl”, for her academic excellence and also encouraging other students of the university to put in more hard work as it pays. This is coming few days, after the Lagos State Governor, issued a cheque of N5 million to two students for their academic excellence.