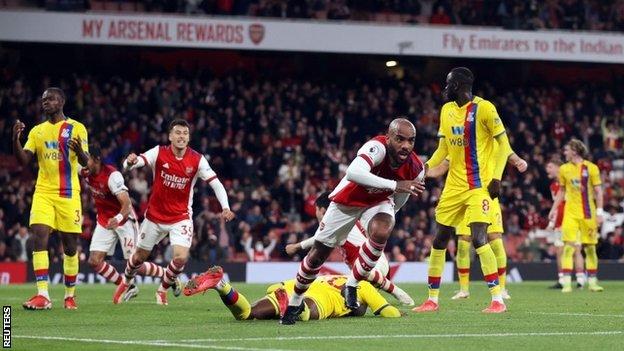 Arsenal were able to secure a 2-2 draw at the Emirates stadium as they played Crystal Palace in their Monday night premier league encounter.

It was Arsenal who started the scoring with a goal from Pierre-Emerick Aubameyang in the eight (8′) minute of play. Before Crystal Palace seized control of the match with goals from Christian Benteke and Odsonne Edouard, only to then concede a late equaliser to Alexandre Lacazette.

It was an emotional night for Crystal Palace manager, Patrick Viera who was welcomed greatly by Arsenal fans following his return to his former club. But it was a disappointing encounter for the French manager who had spent so much of the preceding 90 minutes in what seemed to be complete control of his old team, and had been just seconds away from the most memorable of victories.

Aubameyang’s goal was a typical poacher’s effort, stabbed home from close range after Nicolas Pepe’s shot had been palmed away by Vicente Guaita. From there it seemed that Arsenal might breeze clear, with Ben White looking composed at the back and Emile Smith Rowe providing thrust in the final third.

But their dominance was not to last, as this new-look Palace grew into the game and soon took control of the midfield, where Arteta had selected an attack-minded trio of Smith Rowe, Thomas Partey and Martin Odegaard.

It was hardly the most defensively secure group of players, and there were plenty of spaces for Palace to pass into. The visitors ended the first half having enjoyed 57 per cent of the ball, which was an indication of their change of style under Vieira’s management.

That advantage was not to last for long, though, as Partey was soon caught on the ball by Jordan Ayew. Benteke seized upon it, cutting inside Gabriel Magalhaes and slamming his finish beyond Ramsdale. Twenty-three minutes later Odsonne Edouard gave Palace the lead with a finish that flew into the roof of the net in the 73′ minute.

The equaliser never looked likely for Arsenal, until the final minute of the match. A corner bobbled around the penalty box, ultimately falling to Lacazette just a few yards out who tapped it into the net.

Speaking after the match Patrick Veira told newsmen that “It was so close, but we are saying that too often. I am frustrated for my players, they were brave, and they deserved to win. To concede like that was unlucky.

“My players were frustrated, we threw away two points. To come from 1-0 down, to concede with the last kick of the game. I am pleased with the reaction in the dressing room, because they are not happy.”

“I was lucky to be part of a good generation at Arsenal who won trophies, I am always going to love this club and the fans, I will always be an Arsenal fan. CPFC is an exciting club and I am rally enjoying myself,” He added.