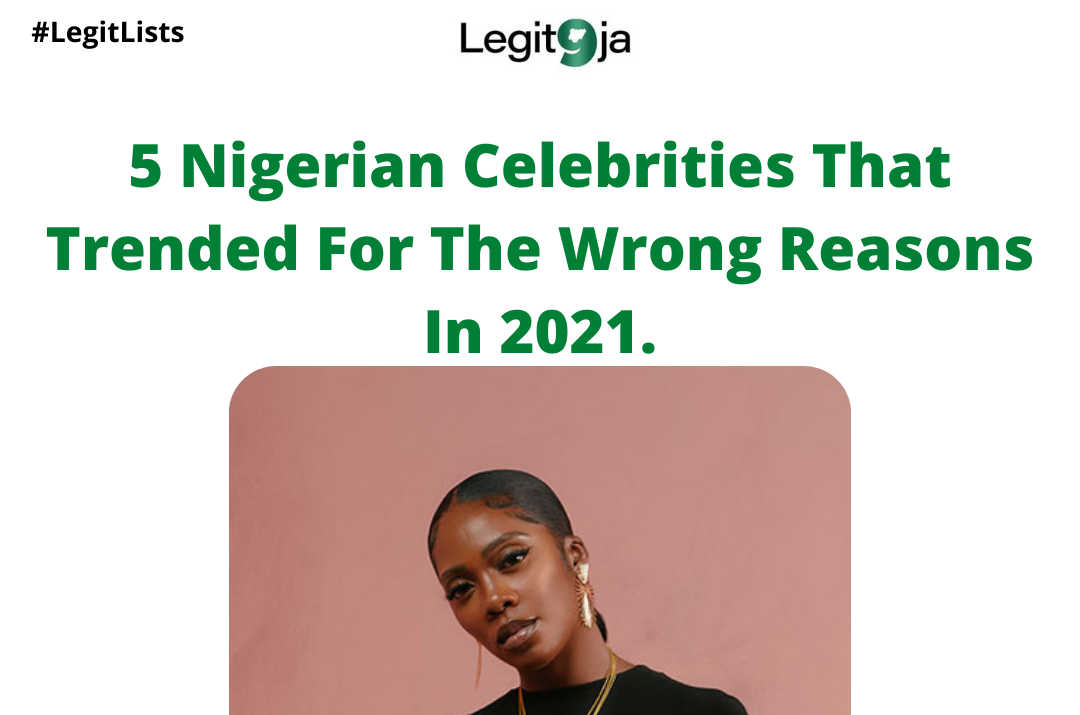 There were a lot of scandals, milestones, high and low moments in the Nigerian entertainment industry in 2021. As the case may be several Nigerian celebrities and socialites made headlines and trends during this time, some for the right reasons while others for the wrong reasons.

Here is a list of some Nigerian Celebrities That Trended For The Wrong Reasons In 2021:

Paul Okoye of the popular P-Square music group made headlines this year after his wife Anita Okoye filed for divorce.

The details surrounding the crashed marriage sprung from the leak of the official petition for the divorce which cited irreconcilable differences. Also it was learned that Anita Okoye and her 3 kids relocated to the United States a few months back.

There were further reports that Anita has been the alleged reason for the group’s break up.

Also read: Could This Be True? Anita Okoye, The Alleged Reason Behind P-Square’s Break-up. (See Details)

The couple have been together for over 17 years and have been married for 7 years.

2Face Idibia made headlines twice for the wrong reasons in 2021. The first was when his wife, Annie spat fire and brimstone as she attacked his family members and claimed that the veteran singer ‘‘slept under the same roof’’ with Ms. Pero Adeniyi alongside her three children which she had for 2face when they travelled to Disneyland, U.S on vacation.

The second time 2Face trended for the wrong reason was when his fellow colleague, Brymo claimed the singer accused him of sleeping with his wife and that 2Face arranged some thugs to attack him.

Also Read: Brymo Claims 2Face Accused Him Of Sleeping With His Wife.(See Details)

Instagram twerk dancer, Jane Mena was another celebrity who made headlines for the wrong reason in 2021. The dancers secret of having an extra-marital affair with Prince Kpokpogri the former lover of Nollywood actress became exposed after her s3x tape with him was leaked.

Jane mena earlier filed a suit against the movie star over her perceived malicious and damaging statements against her, but when the sex tape leaked she ended up pleading.

Yoruba actor, Olanrewaju Imiyinka popularly known as Baba Ijesha made headlines for the wrong reasons this year after he was alleged that have been involved in a sex scandal with a minor, the foster daughter of of his female colleague, Damilola Adekoya a.k.a Princess about seven years ago.

Also Read: Comedienne Princess’ Daughter Opens Up On How Baba Ijesha Harassed Her.

His case which is still being decided in court shook the entertainment industry and even led to a cold war between actress Nkechi Blessing, Iyabo Ojo and Yomi Fabiyi.

Tiwa Savage made headlines for the wrong reason twice this year. The first the fight between Tiwa Savage and another pop queen, Seyi Shay in the month of June. The two female singers threw caution to the wind as they engaged in a ‘fight’ at a Lagos saloon to the shock of their fans. In a viral video, they were seen being pulled apart from each other and many condemned their action.

Tiwa then suffered a huge setback when her s3x-tape finally surfaced online. The singer had revealed beforehand that someone was trying to blackmail her with her s3x tape which was mistakenly posted on Snapchat. She vowed never to succumb to such cheat blackmail.

Also Read: Tiwa Savage Explains How She Got Extorted For Her Leaked S3x Tape & Her Relationship With Tee Billz (See Video)

But to her surprise, the blackmailer made good his threat and released the video online. Till date, the s3x tape is still trending.

The s3x video which was immediately deleted on Snapchat after her lover realised the error remained one of the biggest scandals of the year.

Worthy of mention is:

Boma and Tega’s sex escapade in the Big Brother house.

The two housemates were caught on camera, having an amorous affair under the duvet. The action, which they claimed was part of giving their fans ‘highlight’ was greeted with mixed reactions on social media, leading to the eviction of Tega, and almost ruining her marriage.

Boma also was evicted for the same reason. But upon his eviction, the Hollywood actor apologized to Nigerians for his actions in the house via his Twitter account.