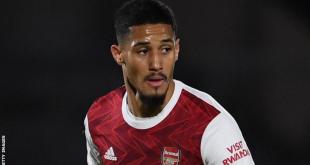 Arsenal manager, Mikel Arteta has given a reassuring update on the future of loaned-out defender, William Saliba from Marseille.

Saliba signed for Arsenal in the summer of 2019 for £27m, however, since then, questions have been raised over the defender’s future as a Gunner after he failed to make a single league appearance before being shipped out on loan.

The centre-back has made a total of 51 appearances this season for Marseille, helping them to qualify for the Champions League in the process. It seems the youngster wishes to stay with the French club again next season.

Also Read: Arsenal Loan Off William Saliba To Nice For The Rest Of The Season.

Speaking about the defender’s immediate future, Arteta, who spoke with RMC Sport said:

“He has the experience to be competitive with us. We sent him to Marseille for his growth.

“William wanted to be regular starter as you know but now we want him back at Arsenal.”

Saliba has had a successful loan spell at Marseille where he was also awarded young player of the season.

However, it was reported by the Mirror that fellow defender Gabriel Maghaeles could potentially exit the Emirates and so Saliba may find himself back with the Gunners next season and playing in the Europa League.